Things to keep in mind:

My motherboard currently supports both SATA II and III (3 Gb/s and 6Gb/s respectively), but after reading some online, it seems as though connecting a HDD to the 6 Gb/s is pretty much pointless.

As of right now, the fastest HDD is the Western Digital VelociRaptor WD1000DHTZ: With a SATA III interface, its maximum external transfer rate is 401 MB/s (faster than SATA II). However, this is only significant when reading data that is already buffered or when using write acceleration.

The HDD’s maximum throughput is 209 MB/s, which should not be slowed down by SATA II.

If this is the case I’m going to leave my two SATA III ports open for something that can actually use it (which at this point I’m not really sure what can).

Current consumer-level SSDs can certainly benefit from SATA III: For example, the Samsung 830 has a sequential reading speed of 520 MB/s, which would be severely slowed down by a SATA II interface.

When performing random reads, the interface’s speed affects the throughput far beyond its rated limit: 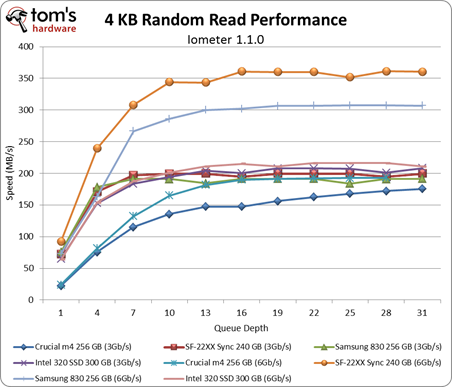 Furthermore, consumer-level SSDs could be much faster than even SATA III: For example, the PCIe SSD OCZ RevoDrive 3 has a maximum reading speed of 975 MB/s.

No single HDD can fill a 6Gb/sec SATA link, nor a 3Gb/sec link.

If you use SSDs or port multipliers then it is a different story.

Sure, there are drive with 10000 rpm and 15000 rpm, but they are rare, expensive, noisy and more targeted at enterprise users than at home users. These high-performance hard drives saturate SATA 1.

Full SATA 2 speeds are unreachable for conventional HDDs for many years to come.

The only use for higher interface speeds would be the ability of a drive to transfer data from its buffer (usually 8 – 64 MB). Do you care about it?

There is no mention here as far as i can see of the bottle neck at most motherboards sata 6gbs controller – whilst the hdd itself and the processor may support the quoted speeds of write and read, the motherboards onboard sata 3 controller in say an x58 board will not support these speeds at all.

When thinking of upgrading to ssd, remember that if the rest of your hardware is two or more years old you will probably not be able to achieve the highest speeds quoted as some of the older onboard controllers will not support such speeds. Higher speeds can be achieved by arranging drives in a raid array if your motherboard supports raid – but this may be a little too much for the average user to contemplate. In fact some users with older chipsets report faster speeds by using the sata 2 port instead of the earlier sata 3 ones.

To test the actually read write speeds of the ssd in your system you can use this link – there is a link here to the AS SSD Benchmark Test
http://www.overclock.net/t/754763/as-ssd-benchmark-thread

pcie ssd’s offer much higher performance figures as they bypass the slow controllers completely – their only downside is that bandwidth is split between your pcie slots so if you use a pc for graphic applications and have a high end graphics card the bandwidth will reduce for each slot – ie 2 x 16 pcie will reduce to 1 x 16 and 1 x 8. Another thing to bare in mind is that the motherboard needs to support boot from the pcie slot.if you plan to install your operating system on it.

When in doubt have a good look around for info before you commit your cash. i have always found overclock.net to be one of the best sources of information when planning a build or upgrade, toms hardware and anantech offer good reviews and advice too.

With the advent of helium-filled drives, manufacturers are coming out with 10 TB, 12 TB, and even 14 TB hard drives that spin at 7200 rpm, enabled by the lower density of helium which reduces turbulence especially with lots of platters inside the drive. (Previously, larger drives would be limited to 5400 rpm, and traditional non-helium hard drives are currently limited to 8 TB.)

As hard drive capacities increase, their speed increases as well, and this means that electromechanical disks can saturate the SATA 3Gb/s interface. In particular, the Seagate BarraCuda Pro 12 TB drive can exceed 270 MB/s. This is very close to the theoretical 300 MB/s allowed by SATA 3Gb/s, and in fact, is close enough that the drive may not be able to reach this speed in practice without a SATA 6Gb/s link.

However, there is currently no hard drive capable of reaching the 550-560 MB/s or so needed to saturate the SATA 6Gb/s interface—the aforementioned BarraCuda Pro is only halfway there. As hard disk technology advances, however, there may very well be drives that can hit these kinds of speeds. HAMR and MAMR are expected to enable hard drives to exceed 20 TB or even 40 TB in capacity. These drives will most likely be released for datacenter use first, where the predominant interface is SAS 12Gb/s, twice as fast as SATA 6Gb/s. However, there is precedent for enterprise storage technology reaching consumers later on (this has happened with both NVMe SSDs and helium hard drives), so chances are good we will eventually see drives that can saturate SATA 6Gb/s. By the time these kinds of drives come out, however, it’s very likely they’ll get a faster interface to support these speeds.

In short, there are electromechanical hard drives that can require SATA 6Gb/s to attain full performance, but there aren’t any that can saturate the interface.

On the other hand, the vast majority of SSDs are capable of saturating the SATA 6Gb/s interface, and the fastest consumer PCIe SSDs can operate at up to six times the sequential I/O speed of SATA SSDs (and this is from my personal desktop, Astaroth): 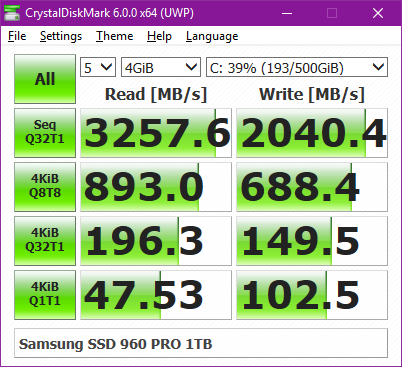 I did some investigation and tests on this topic these days. And share my conclusions here:

My final conclusion: use the M.2 interface SSD directly, don’t waste time on creating RAID, RAID is only for HARD DISK not for SSD. My personal choice is one M.2 SSD disk as my system bootting and working disk, and 4 hard-disks organized as RAID my data disk)