This started occurring in my company. I thought it might be the provider we use to install our images that might be screwing it up, but it could be something with 1903.

Anyway, when you try to re-install it just says that Dot Net is already in the system but turned off. This causes any .application files to not be associated with anything, there’s powershell errors, Teams has issues loading.. basically anything .net.

Put this in a .bat or .cmd file, or just run it line by line in an Admin Command prompt.:

Reboot after all these go through, and everything should be back to normal.

I recently upgraded my Windows 10 Pro 1903 desktop to 1909. I downloaded the full 1909 ISO and run Setup.exe. The process went thru fine. However a program called ‘Windows ISO Downloader’ started giving Error 135.

The error you have received, is likely due to the fact the application you are attempting to use, is specifically trying to target a version of the .NET Framework you don’t have installed. I suggest using official Microsoft tool to download a Windows 10 version 1909 ISO. You can use the Media Creation Tool and/or the Upgrade Assistant. Windows ISO Downloader was only recently updated to support .NET Framework 4.8 on November 8th 2019. If you were not using Version 8.22, and would like to still use the tool, you need to download that version.

RaymondCC .NET Detector looks at registry keys that are created when you install .NET Framework. It does not support the .NET Framework version that are included with Windows 8.0+

I tried to download any recent Windows 10 updates but it now gives
error 0x80d02014 so it’s altogether another issue. I do not know the
state of .Net framework in 1903 as I never needed it ever in 1903, so
this might have been a pre-existing issue or might have been
introduced after 1909.

I looked into Programs and Features and Turn Windows feature On/Off
and there was no .Net framework in the list. There are 3 options
called, .Net, .Net Extensibility 3.5 & 4.8 which just do not get
enabled. I mean I can tick them but after Windows does something they
go back to unticked state.

.NET Framework 4.5+ has never been located in the list of Windows Features for any version of Windows. The lack of .NET Framework 3.5 is likely due to your WinSxS directory not containing it.

You can install .NET Framework 3.5 if you run the same command you ran, but provide a source, to the components you need.

Trying to install offline .Net 4.7 or 4.8 says that it’s already
installed as part of OS.

I tried to reset Windows 10 but to my surprise it says your apps shall
be removed. Similarly Repair attempt tells me that no files and apps
will be kept. The option to select first 2 of the 3 options is grayed
out.

This normally only happens when you have moved vital folders like the user’s profile to a non-standard location.

I think there’s something wrong with my Windows 10 1909 and I am still
back to square one. I am sure clean install is going to fix it but it
will be my last option.

Your inability to install .NET Framework 3.5 is extremely easy to fix and likely the reason your unable to run the third-party application. Perform the following steps to solve that problem.

This has been is issue ever since Windows 10 was introduced. The only way we have been able to enable .NET Framework 3.5.

Once you are done, check if .NET Framework 3.5 is enabled in Windows Features. 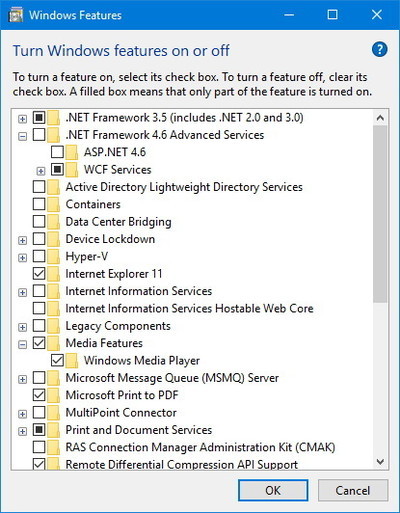