Then I tried to import a blank .scss file to the App component:

It throws an error:

Or, if using Yarn

Edit3: yes, another edit. Moving to sass (dart-sass) is the best solution. Previous one included locking node-sass to version 4.x.x, which is 2 years old and lacks newer SCSS features.

Edit2: sass-loader v10.0.5 fixes it. The problem is you might not be using it as a project dependency, but more as a dependency of your dependencies. CRA uses a fixed version, angular-cli locks to node-sass v4, and so on.

The recommendation for now is: if you’re installing just node-sass, check the below workaround (and the note). If you’re working on a blank project and you can manage your Webpack configuration (not using CRA or a CLI to scaffold your project), install the latest sass-loader.

Edit: this error comes from sass-loader. There is a semantic versioning mismatch since node-sass @latest is v5.0.0 and sass-loader expects ^4.0.0.

There is an open issue on their repository with an associated fix that needs to be reviewed. Until then, refer to the solution below.

Then install the latest version (before 5.0)

Note: LibSass (hence node-sass as well) is deprecated and dart-sass is the recommended implementation. You can use sass instead, which is a Node.js distribution of dart-sass compiled to pure JavaScript.

The only one reason why you get some error like that, is because your Node.js version is not compatible with your node-sass version.

So, make sure to checkout the documentation at node-sass.

Or this image below will be help you in deciding what Node.js version can use the node-sass version. 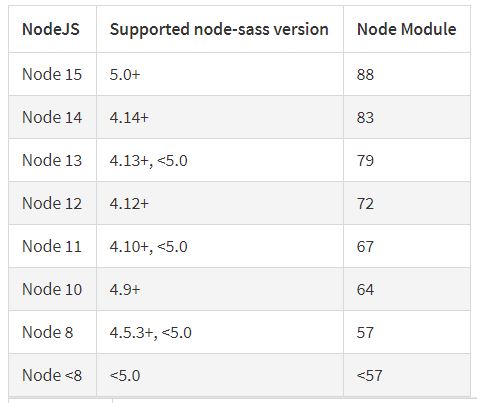 For an example, if you’re using Node.js version 12 on your Windows system (“maybe”), then you should have to install the node-sass version 4.12.

Yeah, like that. So now you only need to install the node-sass version recommended by the node-sass team with Node.js version installed on your computer.

node-sass aka LibSass is officially deprecated as of October 26 2020 and instead you should use sass aka Dart Sass.

For npm you could do:

The best solution for me was uninstalling node-sass.

For those using Yarn:

If you happen to use CRA with the default Yarn package manager, use the following. It worked for me.

This is version problem. Install the right dependent version:

If the error is

Step3: check node-sass in package.json if node-sass is available in the file then again run Step2.

I met the same issue, and here’s how I was able to fix it:

Of course, stop the server, and close your IDE.

So, the best way to upgrade or downgrade the Node.js version, has mentioned above in this answer. Then remove the node_modules, and package-lock.json and install again… You can do it as such:

Small update: In case if you get the below error in regard to node-sass, follow the steps given below.

Steps to solve the issue:

According to the Edit2 of Nicolas Hevia telling that

I launched this command:

That fixed my issue.

Be aware that I am in a development environment. In other cases, the option --save-dev should be removed.

In app.js or wherever the css is being imported, make sure to import css and not scss. The script in package.json will create a css file and that’s what should be imported.

This script will watch a scss file inside of a folder called scss that is inside src. It will then create an css folder inside src and add a css file inside that folder, this is the file you should import in app.js

To run the script:

This error is due to an incompatible version of the sass loader with node-sass.

Add these dependencies at the end of your package.json file.

Note: You can google to check which sass-loader version is compatible with your node-sass version.

Delete a yarn.lock file in the project
and

Please note Node Sass is depreciated and you may replace it by Dart Sass:

Warning: LibSass and Node Sass are deprecated. While they will continue to receive maintenance releases indefinitely, there are no plans to add additional features or compatibility with any new CSS or Sass features. Projects that still use it should move onto Dart Sass.

The below recipe helped me:

Before build, you should also:

Steps to resolve this issue: