How do I hide the #DIV/0! error while a referenced cell is blank?

There is a “special” IF test designed just to handle errors:

This gives you the calculated value of (D11-C11)/D11 unless the result is an error, in which case it returns a blank.

The “if error” value, the last parameter, can be anything; it isn’t limited to the empty double-quotes. IFERROR works for any condition that returns an error value (things that start with a #), like:

This is handy for debugging; the function can be temporarily wrapped around a formula to return some message text when the formula produces an error. It is also a streamlined form of IF test; it doesn’t require including an expression to test it, and then including it again to use its result.

This function is also available to users of other spreadsheet programs. It was added to LibreOffice Calc in version 4.0 (not yet the distributed version in some Linux distros). As @Kroltan points out, though, it is even more streamlined in Google Sheets, where the “if error” value is optional; it defaults to a blank if missing. So in a case like this, where you just want to hide potential error values, Google Sheets can do it with IFERROR(expression).

Within an IF statement is a logical check (the first part).

To avoid errors caused while your production and/or the goal data is blank, use the OR with the ISBLANK function within the logical check.

Select the whole spreadsheet, then under menu Home – Conditional Formatting – New Rule… – Select Format only cells that contain – Under Format only cells with select Errors – Click Format… button – Go to the Font tab – Under Color select the same font color as the background (such as white). 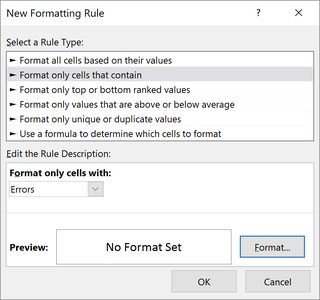