Is anyone familiar with this notation for a drive letter in windows H:35\?


This syntax is meaningless and has to do with some obscure Resource Monitor bug
that dates back to Windows 7.

There have been multiple questions about this weird syntax, but no answers:

This is the result of a bad find-and-replace. The bug can appear when there are at least 10 volumes known, regardless of how many are currently available or whether any are mounted in directories.

The “original” way Resource Monitor understands file paths involves Object Manager names, e.g. \Device\HarddiskVolume6\path\to\file.txt. The device/volume part of these names is not so user-friendly, so Resource Monitor tries to translate the volume part to a “DOS device”, i.e. drive letter with colon. Part of its initialization, specifically the WcdDiskMonitor__UpdateDrives function in wdc.dll, is building a table of Object Manager names and DOS devices using the GetLogicalDriveStrings and QueryDosDevice functions. On my computer right now, that table looks like this:

Lower numbers are occupied by various OEM partitions that don’t have a drive letter. This will be important in a moment. Numbers 7 through 9 are unassigned because I created then deleted a few volumes.

WdcDiskMonitor__SetFileName and WdcDiskMonitor__DeviceNameToDosName prettify the file path as much as possible, which involves consulting the DOS devices table to replace an Object Manager name with a DOS device if possible. With just those DOS devices, disk activity on my E drive displays nicely because \Device\HarddiskVolume10 is identified as a volume with an assigned drive letter and replaced with E:. Paths on the E drive don’t start with \Device\HarddiskVolume6, so C: does not get substituted in.

But if I use e.g. mountvol to assign a drive letter to volume 1, the DOS devices table looks like this: 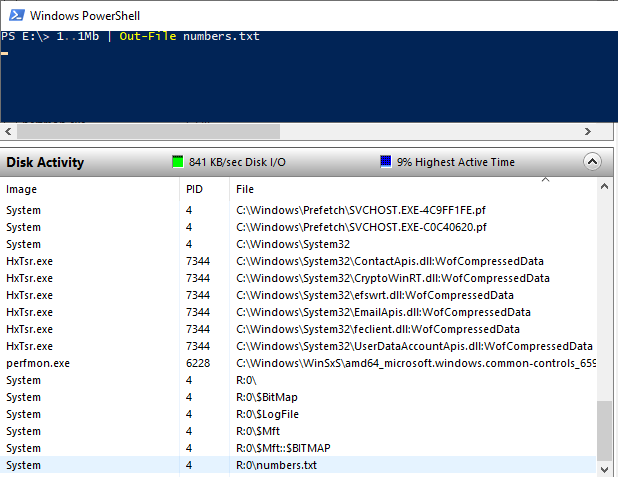 To answer the question of how to determine the real meaning of this bogus drive specification, we can explore the Object Manager namespace with WinObj. Open the GLOBAL?? directory and find the entry whose name matches the drive letter (ignore the number after it for now), e.g. R:. Note its Symbolic Link Target, e.g. \Device\HarddiskVolume1. Append the extra number from Resource Monitor to that, reconstituting the Object Manager name, e.g. \Device\HarddiskVolume10. Sort the list by Symbolic Link Target and find the names linked to this Object Manager name. If one of them is a drive letter, e.g. E:, that’s the volume Resource Monitor is talking about.

Otherwise, find the one whose name starts with Volume{ and cross-reference it with the output of mountvol to find a more familiar-looking mount point.