Is it possible to upgrade a basic USB-C to have USB-C Alternate Mode?

With USB 3.2, two or four of the differential high speed lanes can be used for Alt Mode. If USB data transmission is required, it will use two lanes, leaving the remaining two for Alt Mode, otherwise, all four lanes are available for Alt Mode.

Essentially it requires the use of a USB Type-C™ DisplayPort™ ALT Mode Crosspoint Switch such as the TUSB1046-DCI from Texas Instruments. This device essentially switches over the high speed data lanes and the DisplayPort output from the GPU. 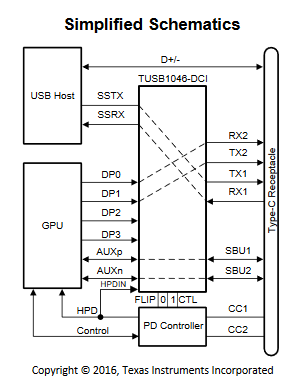 If that switch isn’t there then no software can do anything to emulate it.

As an alternative you can use different “DisplayLink” adaptors such as the DL-1×5 adaptors which are essentially low speed USB based graphics adaptors. I wouldn’t use them for gaming, but they should manage to display an image on a monitor.

I also found out from HP Forums that HP is somehow limiting their USB Type-C ports not to support Alternate Mode.

HP is not “somehow limiting” their USB-C ports to not have DisplayPort any more than Ford is “somehow limiting” some of their trucks to not have 4 wheel drive. In both cases adding this takes more engineering, more material, more time, and therefore more money. Your HP laptop without DP on the USB-C port cost less to buy than one that does because there was less time and material to make it.

Is it possible to install a software or a driver to enable Alternate Mode or perhaps purchase a hardware dongle/adapter?

I have seen a kind of dongle that will plug into two USB 3.x/USB-A ports, a DP port, and have a USB-C output with DP alt mode. Don’t touch them. They violate the USB specs and can damage hardware from their undefined behavior.

I wouldn’t want to buy a new laptop just to support video over USB-C.

You don’t have to, you can get a new dock. A dock with DisplayLink. DisplayLink is a brand of USB-to-video chips that many dock makers use on getting video to laptops with USB-A, o with USB-C that lack DP alt mode.

What it sounds like you need instead of a dock is a KVM switch. A KVM switch is an easy way to share monitor(s), a keyboard, mouse, and often speakers and/or USB devices, between two computers. There are KVM switches that will support two DP ports, or one port with MST daisy chaining, for two displays. There are KVM switches for switching among 4 computers, and on up to like 64 if that’s your thing. There are all kinds of them. Some cost more than others.

There are docks with KVM switches, or KVM switches with docks. Whatever you call them they can keep the number of cables you need to plug in to make them work to a minimum. As nice as they sound it’s likely cheaper to buy separate docks and a KVM switch.

There is no cheap and easy option here. There’s cheap by swapping the cables manually. There’s easy, get the right dock for each computer and a KVM switch. Pick one.

One final thing though, there are monitors with a built in KVM. It’s possible you have such a display and don’t know it, but unlikely. The one’s I’ve seen take advantage of having multiple inputs, like most any other monitor, but they added the extra bits inside to switch not just video but the keyboard and mouse between two computers. They will use the USB-C port for one computer, and then HDMI and USB-B for the other computer. A button on the monitor switches between the two.

That gives another option, buying a new monitor.