in my Angular app i have a component:

but in the “makes” property I have a mistake.
I dont know what to do with it… 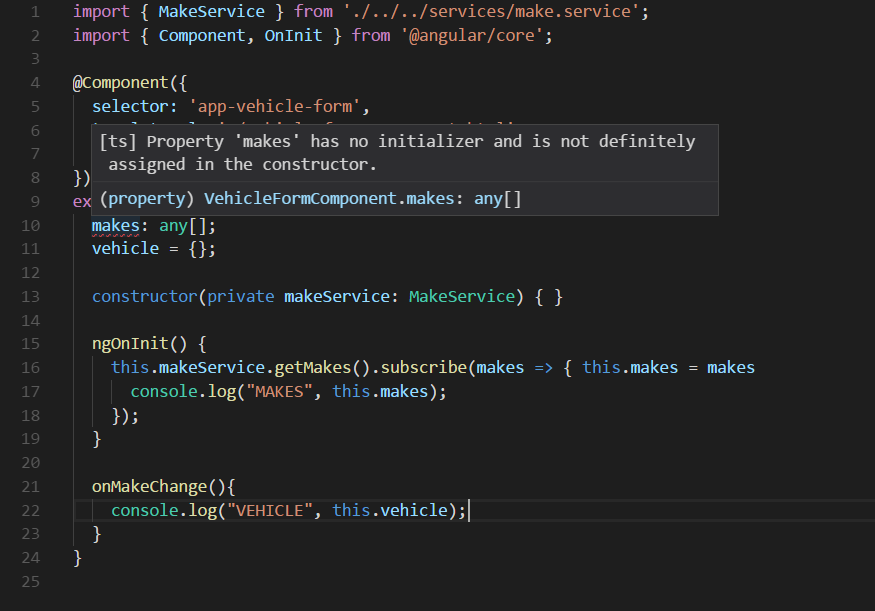 Just go to tsconfig.json and set

to get rid of the compilation error.

I think you are using the latest version of TypeScript. Please see the section “Strict Class Initialization” in the link.

There are two ways to fix this:

A. If you are using VSCode you need to change the TS version that the editor use.

B. Just initialize the array when you declare it

or inside the constructor:

It is because TypeScript 2.7 includes a strict class checking where all the properties should be initialized in the constructor. A workaround is to add
the ! as a postfix to the variable name:

We may get the message Property has no initializer and is not definitely assigned in the constructor when adding some configuration in the tsconfig.json file so as to have an Angular project compiled in strict mode:

Indeed the compiler then complains that a member variable is not defined before being used.

We could silence the compiler by stating the variable may be optional:

But then, we would have to deal with the case of the variable not being defined, and clutter the source code with some such statements:

Instead, knowing the value of this member variable would be defined in time, that is, it would be defined before being used, we can tell the compiler not to worry about it not being defined.

The way to tell this to the compiler is to add the ! definite assignment assertion operator, as in:

Now, the compiler understands that this variable, although not defined at compile time, shall be defined at run-time, and in time, before it is being used.

It is now up to the application to ensure this variable is defined before being used.

As an an added protection, we can assert the variable is being defined, before we use it.

We can assert the variable is defined, that is, the required input binding was actually provided by the calling context:

Note that the ngOnInit method is called after the input bindings attempt, this, even if no actual input was provided to the bindings.

Whereas the ngOnChanges method is called after the input bindings attempt, and only if there was actual input provided to the bindings.

Go to your tsconfig.json file and change the property:

Hope this will help !!

The error is legitimate and may prevent your app from crashing. You typed makes as an array but it can also be undefined.

You have 2 options (instead of disabling the typescript’s reason for existing…):

1. In your case the best is to type makes as possibily undefined.

So the compiler will inform you whenever you try to access to makes that it could be undefined.
Otherwise, if the // <-- Not ok lines below were executed before getMakes finished or if getMakes failed, your app would crash and a runtime error would be thrown. That’s definitely not what you want.

2. You can assume that it will never fail and that you will never try to access it before initialization by writing the code below (risky!). So the compiler won’t take care about it.

Just go to tsconfig.json and set

to get rid of the compilation error.

Otherwise you need to initialize all your variables which is a little bit annoying.

reason behind this error is :

You either need to disable the --strictPropertyInitialization that
Sajeetharan referred to, or do something like this to satisfy the initialization requirement:

You can also do the following if you really don’t want to initialise it.

If you want to initialize an object based on an interface you can initialize it empty with following statement.

It should now works.
I’m using angular 12 and it works on my code.

As of TypeScript 2.7.2, you are required to initialise a property in the constructor if it was not assigned to at the point of declaration.

If you are coming from Vue, you can try the following:

TSError: ? Unable to compile TypeScript:
(path)/base.api.ts:19:13 – error TS2564: Property ‘apiRoot
Path’ has no initializer and is not definitely assigned in the constructor.

A batter approach would be to add the exclamation mark to the end of the variable for which you are sure that it shall not be undefined or null, for instance you are using an ElementRef which needs to be loaded from the template and can’t be defined in the constructor, do something like below

When you upgrade using [email protected] , its compiler strict the rules follows for array type declare inside the component class constructor.

For fix this issue either change the code where are declared in the code or avoid to compiler to add property “strictPropertyInitialization”: false in the “tsconfig.json” file and run again npm start .

Angular web and mobile Application Development you can go to http://www.jtechweb.in

Another way to fix in the case when the variable must remain uninitialized (and it is dealt with at the run time) is to add undefined to the type (this is actually suggested by VC Code). Example:

Depending on actual usage, this might lead to other issues, so I think the best approach is to initialize the properties whenever possible.

Can’t you just use a Definite Assignment Assertion? (See https://www.typescriptlang.org/docs/handbook/release-notes/typescript-2-7.html#definite-assignment-assertions)

i.e. declaring the property as makes!: any[]; The ! assures typescript that there definitely will be a value at runtime.

Sorry I haven’t tried this in angular but it worked great for me when I was having the exact same problem in React.

a new version of typescript has introduced strick class Initialization, that is means by all of the properties in your class you need to initialize in the constructor body, or by a property initializer. check it in typescript doccumntation
to avoid this you can add (! or ?) with property

otherwise, if you wish to remove strick class checking permanently in your project
you can set strictPropertyInitialization”: false in tsconfig.json file

This has been discussed in Angular Github at https://github.com/angular/angular/issues/24571

I think this is what everyone will move to

Next to variables “?” You can fix it by putting it.