Time components of numdifftools.Jacobian should not be equal to zero

I am trying to compute numerically partial derivatives of the final state vector X_f with respect to the initial state vector X_0 and period T, which are in fact the components of a Jacobian matrix.

The vectorial partial derivative of X_f relative to X is given by the following Jacobian matrix: 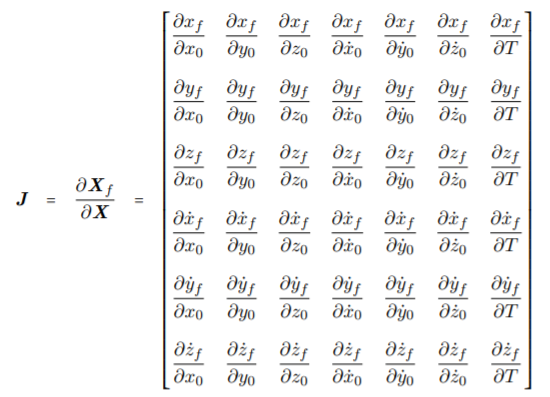 To compute this matrix, I made a function (see propagation function) that takes as a variable a vector composed of X_0 and T called X, and returns X_f. Then, this function is combined with numdifftools.Jacobian to compute the Jacobian matrix. When I run my code (see below), the Jacobian matrix is properly calculated for the partial derivatives of X_f relative to X_0 (first 6 columns), but the very last column with partial derivatives of X_f relative to T are equal to zero. I know this cannot be because those derivatives are actually the final velocities and accelerations at t=T.

How come the initial condition X_0 is taken into account in the evolution of X_f and the time T is not? That does not make any sense. In solve_ivp, it looks as if the timespan (tspan=(0,T)) is completely ignored but the initial condition (y0=X_0) is not. Why is that? Am I not using solve_ivp and numdifftools.Jacobian properly?

If my question needs more details, please let me know, I’ll happily provide more explanations by the end of day.

These entries for df/dT in the final column look much more plausible.

All of your variables appear to be real-valued, but you have requested method=complex in your call to Jacobian. This is asking for trouble, for reasons I shall expand on below.

As stated in the numdifftools docs: