What is the difference between using constructor vs getInitialState in React / React Native?

What are the main use cases for both? Are there advantages / disadvantages? Is one a better practice?

The two approaches are not interchangeable. You should initialize state in the constructor when using ES6 classes, and define the getInitialState method when using React.createClass.

See the official React doc on the subject of ES6 classes.

Hence the question boils down to advantages/disadvantages of using ES6 or ES5.

Let’s look at the difference in code

React community is moving closer to ES6. Also it is considered as the best practice.

There are some differences between React.createClass and React.Component. For instance, how this is handled in these cases. Read more about such differences in this blogpost and facebook’s content on autobinding

constructor can also be used to handle such situations. To bind methods to a component instance, it can be pre-bonded in the constructor. This is a good material to do such cool stuff.

With the new changes in Javascript class API, you don’t need a constructor.

This will still get transpiled to constructor format, but you won’t have to worry about it. you can use this format that is more readable.

Now, you don’t even need a class component to have a state. It can even be done in a functional component.

Note that the initial state is passed as an argument to useState; useState([])

Read more about react hooks from the official docs

OK, the big difference is start from where they are coming from, so constructor is the constructor of your class in JavaScript, on the other side, getInitialState is part of the lifecycle of React.

constructor is where your class get initialised…

In the React v16 document, they didn’t mentioned any preference, but you need to getInitialState if you using createReactClass()…

In ES6 classes, you can define the initial state by assigning
this.state in the constructor:

With createReactClass(), you have to provide a separate
getInitialState method that returns the initial state:

Also created the image below to show few lifecycles of React Compoenents: 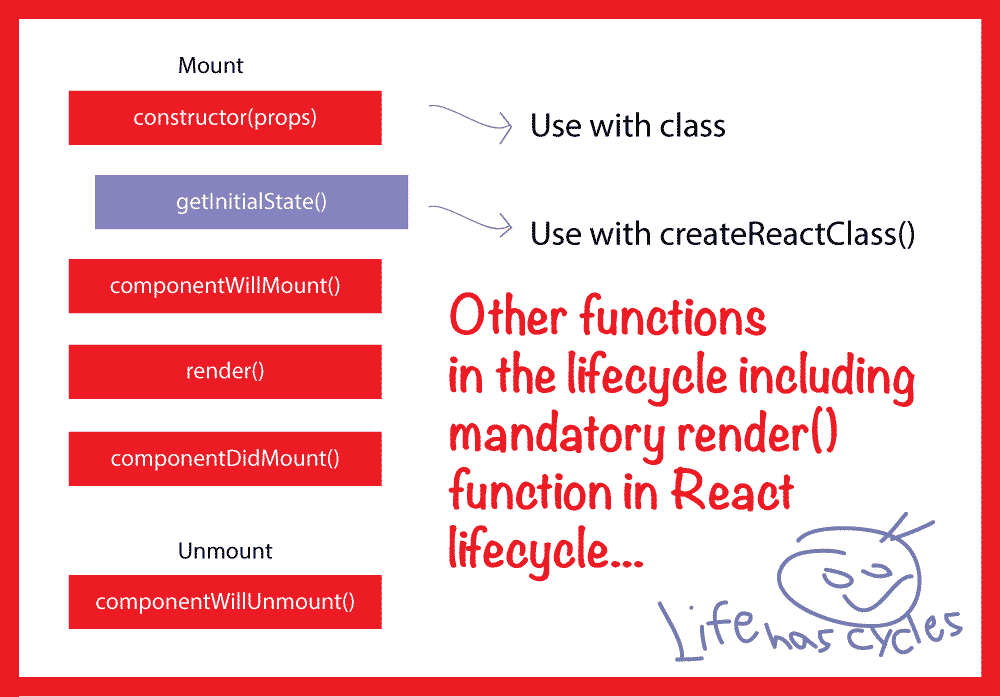 If you are writing React-Native class with ES6, following format will be followed. It includes life cycle methods of RN for the class making network calls.

These days we don’t have to call the constructor inside the component – we can directly call state={something:""}, otherwise previously first we have do declare constructor with super() to inherit every thing from React.Component class
then inside constructor we initialize our state.

If using React.createClass then define initialize state with the getInitialState method.

The big difference is start from where they are coming from, so constructor is the constructor of your class in JavaScript, on the other side, getInitialState is part of the lifecycle of React . The constructor method is a special method for creating and initializing an object created with a class.

Here is an example of it :

getInitialState
In ES6 classes, you can define the initial state by assigning this.state in the constructor:

Look at this example

With createReactClass(), you have to provide a separate getInitialState method that returns the initial state:

In constructor we should always initialize the state.