Which Wifi Channel should I use? [closed]


Whew, thats a lot of questions.

First things first, It appears you are interested in wireless technology. You should checkout the Cisco Wireless Network Administrators Certification Book. It will answer a lot of these questions. (You can get the previous version for cheap)

Signal strength will usually trump AP occupancy. This isn’t too much of an issue.

If you are in a location where all 13 channels are equally taken, then your ideal solution would be to move to the 5ghz UNI Bands. If you don’t have the option to move to 5ghz, then you should go with the channel with the lowest competing signal strength.

Many wireless administrators recommend staggering your AP layout in a triangular fashion alternating between 1, 6 and 13. That way you are able to keep AP’s on the same channel as far away as possible from each other.

Basically the transmission occurs on the actual channel but the transmission ‘over flows’ onto nearby frequencies. The same thing happens in your car when you can still hear a radio station if you tune 1 frequency up or down.

Auto Channel Select is junk. The only wireless routers that I’ve seen somewhat intelligently are the open mesh access points. Every other AP I’ve run into, perform terribly in their channel selection. Most recently I saw 3 ubiquity AP’s set to auto negotiate, and every one of them chose the exact same channel, despite there being 23 other open 5ghz frequencies.

Never trust auto channel select, The fact that the AP’s jump around, make it impossible to troubleshoot why 5 minutes ago the network was great, and now it is performing horribly.

The 2.4 ghz frequency is known as the ISM band. (Industrial Scientific Medical) meaning that anyone can use it without a license (along as you stay within certain limits specified by the FCC).

If you ever get your hands on a spectrum analyzer (some high end ubiquity wireless bridges have software spectrum analyzers built in), turn on a microwave and then look at the wave patterns. You will see the microwave absolutely drowning out the access point. http://www.ekahau.com/userData/ekahau/wifi-design/screenshots/spectrum-analyzer-big_microwave_oven.png 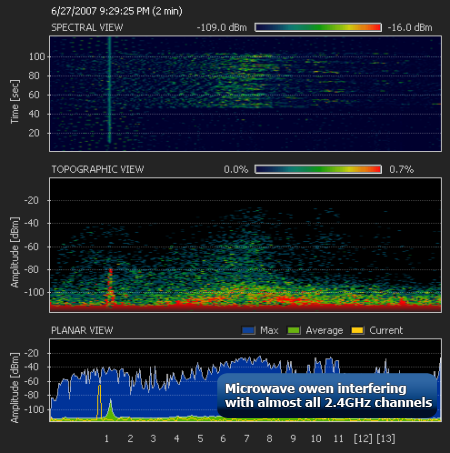 The baby monitor will not show up on normal software because they do not broadcast an SSID. (Other than the fact that your noise floor will be way higher). They will show up in spectrum analyzers.

Feel free to use channel 13 as long as you keep the transmissions indoors and less than 1 watt. You will likely get less sideband interference.

The US only originally allowed for channels 1 – 11. An addendum was added that allows for the usage of channel 12 and 13 in low power, indoor only settings.

Channel 14 is allowed in Japan, but only if using 802.11b. I know some security experts who setup a hidden AP on channel 14 during pen tests because it is much less likely to show up on a wireless scan.

Wikipedia has some good information on the different frequencies

The honest answer is that in complicated interference environments, even the best RF/802.11/network engineers can’t always predict—with any accuracy—which channel will perform best. Part of that is because some 802.11 radio designs deal with different types of interference better than others.

If you don’t have a spectrum analyzer you can’t see non-WiFi users of the 2.4GHz band, and even if you do, unless it’s clear that one channel is dramatically cleaner than the other channels, it’s hard to know how your particular devices will perform.

Do some quick performance tests on 1, 6, 11, and 13, and see which one performs best at the moment. Then go with the one that performed best. If you later suspect that your chosen channel sucks because some new interferer came up (someone is on a call with their 2.4GHz cordless phone), then re-run the test on 1, 6, and 11 again, and see if you’d rather change your choice.

In summary, if you really care about picking the best channel, there’s no substitute for an empirical test of actual performance. @spuder did a great job of answering your specific questions and giving the information you need to know to try to pick a channel without actually testing the actual thing you care about, but if you really care about it, you need to test it, and not try to rely on heuristics like “signal strength usually trumps AP occupancy”.

Yes, the best 802.11 2.4GHz channels are 1, 6, and 11. As such manufacturers often choose one of those frequencies on routers by default. You can use Wifi Analyzer on Android, airodump-ng on Linux, etc to determine which channels are congested in your area.

In addition, depending on legality (and device firmware compatibility) you may have channel 13 and 14 available.

You may opt for a 5GHz router if your client devices support it and there aren’t many other 5GHz routers in your area. Keep in mind that 5GHz has less range (but more theoretical bandwidth) than 2.4GHz.

Lastly don’t forget to enable WPA2 AES encryption (or better) to protect not only who is able to join the network but also to protect the packets from being easily inspected.